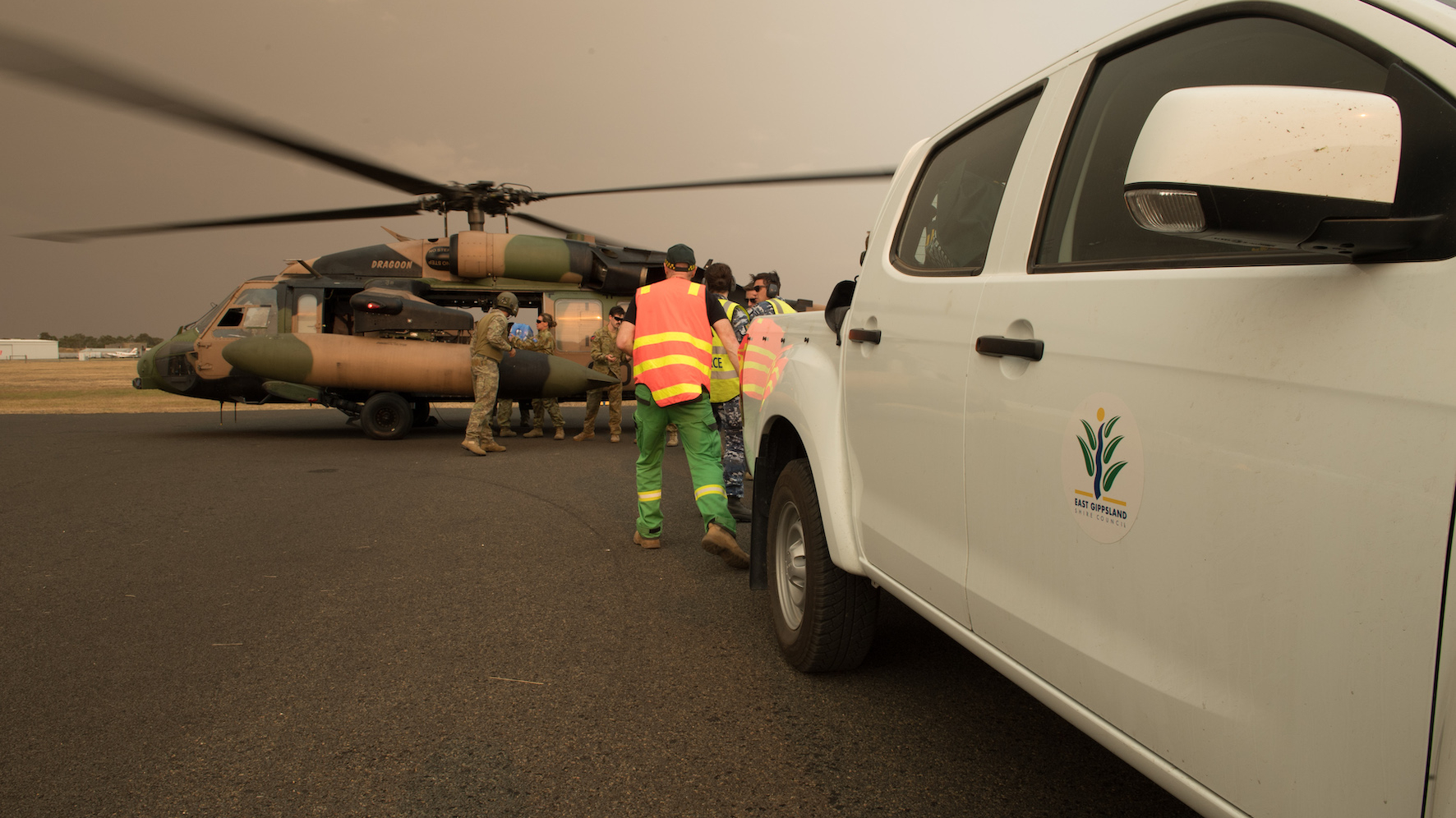 East Gippsland Shire staff and the ADF during the 2019-2020 bushfire season.

While Melbourne was battling thought its second pandemic lockdown, the people of East Gippsland were being hit by their fifth wave of major disruption.

A four-year drought (which continues in some parts of the region), industry transitions that threaten hundreds of traditional jobs (including the state government decision last November to wind down the logging industry) and a once in 100-year bushfire season that destroyed more than 320,000 hectares in East Gippsland.

“It wasn’t a usual bushfire, it wasn’t just a day,” East Gippsland Shire CEO Anthony Basford says. “It went from November to March.”

The fire was finally extinguished just in time for the fourth major disruption, the COVID-19 pandemic.

Though the situation appears grim at first glance, it is not all bad news, Mr Basford says.

“Our community is amazingly resilient. I was in Mallacoota recently, one of the towns worst hit by the bushfires, who were already looking at opportunities.”

Aided by the local council, the people of East Gippsland are already preparing for recovery and their thinking is often far ahead of state and federal and even local government, he says.

“As a rural council, we have advantages that metropolitan councils don’t have. Our staff are part of the community and live locally.

“For instance, some staff members lost their homes in the bushfires but were back at work almost straight away because they knew that the work they were doing was important to the wellbeing and recovery of their neighbours and communities,” he says.

“They don’t want to let their community down.”

The successive waves of disruption haven’t hit everyone evenly, Mr Basford says. The drought saw farmers suffer disproportionately, the bushfires hit the tourism sector hard and the pandemic has had community wide impacts.

“Farmers who have benefitted from the recent rains are now doing better because COVID restrictions don’t impact the work that they do. The tourism sector continues to struggle, but you can’t get a trades person, a fencer or someone to drill a water bore, they are all worked off their feet,” he says. “Hospitality workers and students who work part time in that industry have been hardest hit and lost their jobs.”

This dichotomy of disaster – where parts of the community are adversely affected while other parts can appear to thrive – presents a real challenge for rural councils which don’t have the resources of their metropolitan counterparts.

“We provided $700,000 in COVID-19 support, people who lost their homes in the bushfires have a rates waiver for three years, last year we provided drought relief for farmers and we have provided businesses with rate relief this year.”

The complexity and depth of the challenges facing East Gippsland are hard to fathom, but the Council is determined to build on what has been learned, enhance the strengths that already exist in the community and support the strong connections that have been built with other governments and agencies, State, Federal.

East Gippsland is an important region to Victoria and the nation as a place to visit, for its natural environment and industry. We need to remain on the map and at the forefront of decision making by government. We’re working with community for our renewal as a region, but we need the continued support of government.

East Gippsland is particularly keen to continue nurturing the person-to-person relationships with local government staff from across Victoria who helped East Gippsland during the bushfires.

“Local government has been very agile in the bushfire recovery space. The number of people we had here from other councils was in the hundreds and we formed what we hope will be enduring relationships with City of Melbourne staff. It is a great partnership.”

To handle the bushfire, East Gippsland Shire set up a specialised team and the Shire’s bushfire response provided a solid, long-term, resilience-led model for handling the pandemic.

Regular meetings (daily at first, reducing to three times a week, then down to weekly) were held, so everyone was informed as issues developed, staff were encouraged to take breaks (including leave), to guard against burnout, there were regular check-ins with staff, trauma councillors were provided and regular external briefings kept the community up to speed.

“It was very important that people felt valued and supported,” Mr Basford says.

Technology, especially the council’s social media, was crucial in helping keep the community up to speed during the bushfire and has been critical again during the pandemic.

“Many of our communities are extremely remote. For a lot of people it takes longer to get to Bairnsdale (the shire capital) than it does to get from Bairnsdale to Melbourne. We suffer the tyranny of distance,” Mr Basford says.

Technology has helped tame that tyranny, but so do the council’s service centres dotted around the region: in, Omeo, Orbost, Lakes Entrance, Paynesville and Mallacoota.

“In many instances council is there where people live,” he says.

“We don’t want to lose this use of technology, particularly video technology. Our systems have held up very well.

“Like most councils we have signed off on a new working from home policy but we are also aware that we need to support staff and make sure we really value what people can achieve by working from home.”

Most of the changes forced by five successive waves of massive disruption have been operational and swift.

“Necessity is the mother of invention and we are reinventing what we do and how we do it,” Mr Basford says. “What will come out of these events will be us continuing to think of how we can do things differently to improve and provide the best possible services to residents.”

About the Author: Seamus Bradley

Seamus Bradley is the director of client services at The Agenda Group and a multi-award-winning journalist and communicator. He has worked in senior editorial roles at The Age, Sydney Morning Herald, Herald Sun and RACV. He teaches journalism at Swinburne University and is on the Human Research Ethics Committee at Melbourne IVF. He is is a former board director with Property Initiatives Real Estate (Australia's first full-service non-profit real estate agency), and served on the RACV Community Foundation advisory board.