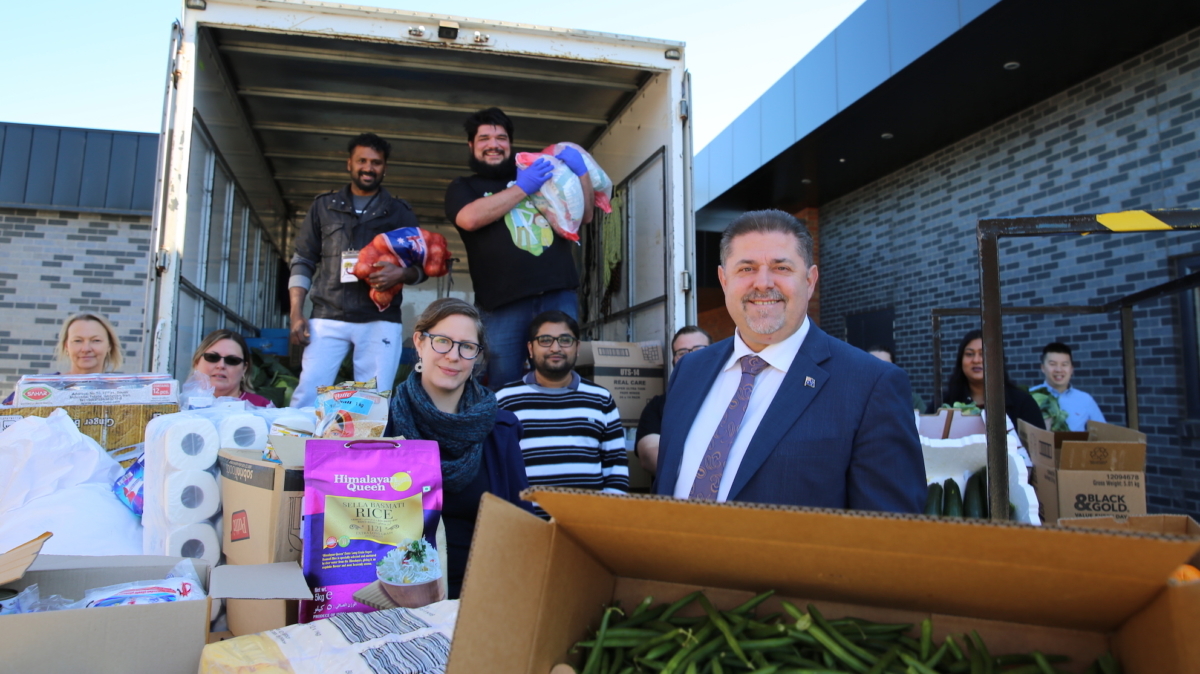 Cr Jim Memeti, Mayor of the City of Greater Dandenong with staff at the market-style centre at Springvale Town Hall.

Facing the economic storm created by the coronavirus pandemic, the City of Greater Dandenong has acted swiftly and with certainty.

CEO John Bennie says the first priority was to preserve jobs. “We operate with ratepayer money and we couldn’t promise that we wouldn’t stand people down. But we made it plain that we are committed to our staff that we would keep as many people as possible meaningfully employed.”

At Dandenong preserving jobs involved open communication and encouraging staff to think laterally and share ideas of how meaningful work could be carried out in lockdown.

The results were inspiring and helped with the municipality’s two biggest challenges: providing support to those in the community most in need; and preserving the council’s financial position for the future.

Material aid agencies in the City of Greater Dandenong were under pressure on two fronts: a massive surge in demand and a big plunge in donations as the COVID crisis hit the economy, and people’s hip pockets, hard.

Lateral thinking saw Council take $330,000 of unallocated community grants program money and staff, whose jobs had been preserved, created a market-style centre at Springvale Town Hall where the material aid agencies could pick up supplies for their clients.

The Council’s cash was used to kick start the process, with the local business community making donations. In the first month, more than 25 tonnes of food was distributed, feeding about 2200 people a week.

“Many local people in need would have struggled to navigate the complicated pathway of state and federal government relief packages and ultimately they would have gone hungry,” John said.

Council understood there would be pressure to freeze the scheduled rate rise, but recognised it would produce only minimal short-term benefit, about $30 per household, while creating dire consequences in future years given the compounding effect on foregone revenue.

“Instead we paid back about $2.5 million – the equivalent value of next year’s rate rise – to our  pensioners, unemployed and disadvantaged community members.”

Maintaining the rate base ensures Council won’t face an $8 million to $10 million gap in funding a decade from now had it foregone the 2020/21 rate rise.

Council’s handling of the crisis has led to new ways of doing things, from reforms at the library service to new ways of feeding the hungry. But the most noticeable impact has, perhaps, been on morale.

Will all the changes stick?

Most likely. “The concept of doing meaningful work and helping the community has had a profoundly positive effect,” John said. “I hope we never lose that.”

About the Author: James McGarvey

Respected for his acumen, professionalism and judgement, James works with CEOs, boards and senior management on major projects that require sensitive handling in challenging environments. He holds a Graduate Diploma (Public Relations) and a Masters in Professional Communications. James is is a Director of CentaCare Melbourne and served on VECCI’s Small Business Council.