The ABS has published its labour force participation figures for August 2020. The Victorian unemployment rate was 7.1 per cent for August, an increase from  6.8 per cent in July.

The August result for Victoria was above the national average of 6.8 per cent. The unemployment rate increased over the month to August in Victoria and Tasmania, while the rate in all other states and territories decreased.

The ABS also had a section on “hours worked” and “people working zero hours for economic reasons”. This data is an attempt understand how people have been affected by the lockdown, such as who has a job but can’t actually perform their work due to the emergency and may be receiving JobKeeper.

This data showed that 3.5 per cent of all people employed in Victoria were working zero hours in August, when the national average was 1.7 per cent. The chart illustrates how improvement is occurring everywhere except Victoria at the moment. The chart also shows how the initial impact of COVDI-19 was negative everywhere. 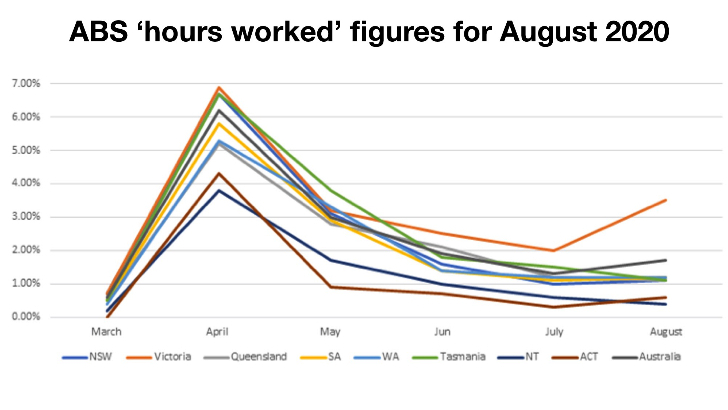